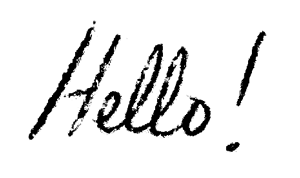 When was the last time you sat down and took the time to handwrite a letter or sketch something on paper? For me, it has been a few years. Why would I suggest to ditch the computer, a rather useful tool used by modern technical communicators, for a piece of paper and a pen? A couple months ago I received a hand written card and it got me thinking.

I was surprised by the letter because I haven’t received mail correspondence in a long time. It takes longer and more effort to write one instead of sending an email or a text message. In return, I wrote back a letter. For me, it was awesome to do something different, traditional, and simple. Plus you support the post office!

It fees good to write!

The effort to write something by hand has been mostly replaced by computers. The typical way of sending and receiving information is by text. Whatever happened to writing by hand on a sheet of paper? Have we become used to looking at digital screens and developed an aversion to pen and paper? Typing and most especially texting is very sanitized, standardized, and boring. There are advantages to technology because you can replicate the text easily, move it around, and read it quickly. So what’s the big deal? I feel that there seems to be no emotion or style when it comes to  reading text on a digital screen or printed out. On the other side of the equation, reading a handwritten note or hearing someone in person is definitely better and more human.

Another nuance of digital technology is the analog of drawing tools and their limitations. For example, a colleague and I were working on developing some flyers and she made the comment that she wished she were in the office or same location instead of teleworking in order to sketch out designs before we started on InDesign. True, that would take us away from the computer, but it would have been faster instead of sketching out a quick layout in Word first.

Lately, we should look at how effective communication should be via technology. Would it be better to email someone or call them instead of instant messaging them? What about texting or video chat? These new forms of communication are great and convenient, but at what cost is this impairing genuine interpersonal communication or what feelings you get from receiving a handwritten note?

After the day is done at work, stop the electronic noise, sit down, grab a pen, some sheets of paper, and write!